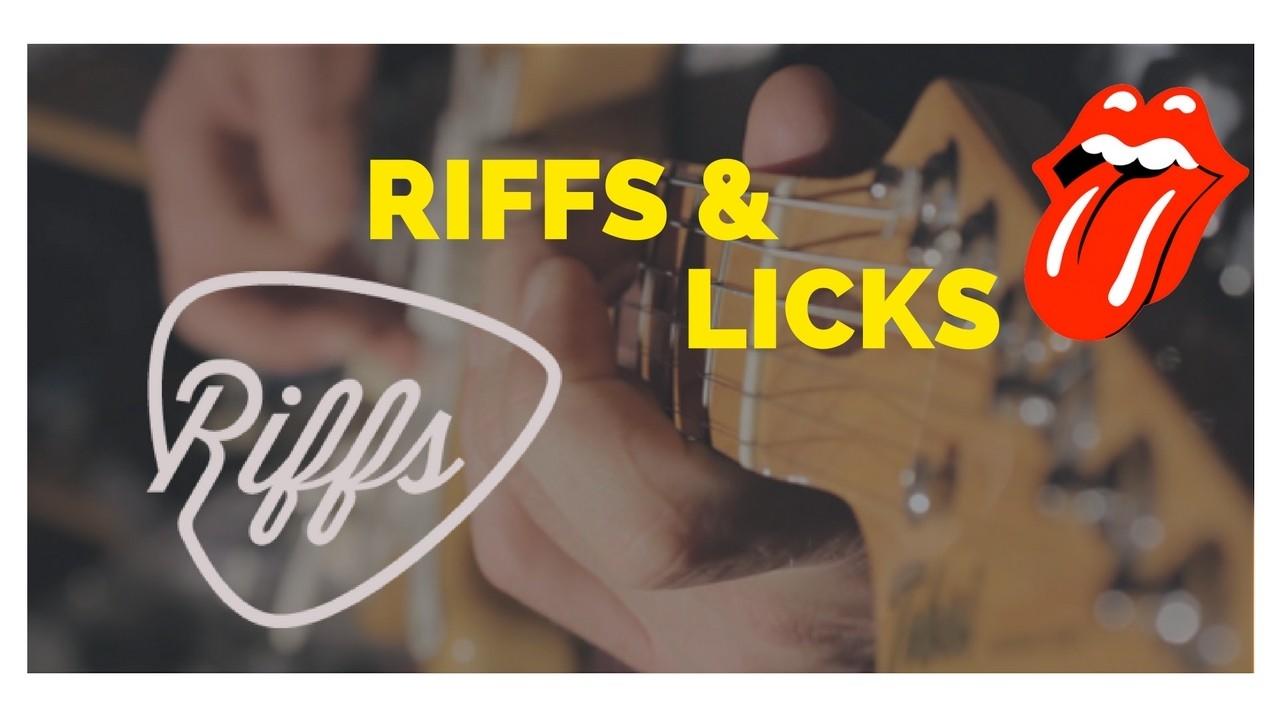 Believe it or not, this is one of the most common questions I receive, and to think we play licks and riffs all the time on our guitars, it still surprises me to hear many guitarist's struggle to understand the difference between the two.

And it's not anyone's fault either because it isn't something you are taught when learning the guitar in the beginnin stages. Have you ever heard a teacher say:

"Now we are going to learn the difference between a lick and a riff..."

Is it really that important to know the differences between these two very common skills (I hear you ask)?

Is it really that important?

YES!!!!!!!!!!!!!  It is probably one of the MOST important differences to understand on your guitar.  And why is that?

Because without knowing the difference could result in you not being the next Keith Richards, Jimi Hendrix or Eric Clapton ..!!! So let's go through the differences:

The Difference Between a Riff and a Lick:

A riff is thematic (a what??).  It serves as the main section for a song.

Think of Satisfaction for example or Smoke On The Water. A riff is often repeated and developed, sometimes with variations, sometimes in different keys, but a riff is always recognisable as the main idea or main part of the song.

A riff is what makes the song 'recognisable' and distinctive. p.s. thematic just means a theme!    ; )

A lick or solo is a portion of a riff, so it is not the main distinction in the song, just part of the song. A lick is often incomplete in musical terms (but don't worry too much about that).

On it's own the lick doesn't usually become the main part of a song like a riff does. But if a lick forms a theme (like a continuous main section in a song), essentially the lick becomes a riff.

Because a lick isn't the main theme, it doesn't have that same association with the song, and so it becomes transferable: a lick can be used in other songs without necessarily having to allude to the original lick. Clever!

Riffs are the main 'sound' or theme of a song, and licks are just parts of a song - like a verse, or chorus.

And so there you have it, there is a difference between a riff and a lick. Next time you play a solo in a song you will know its a type of lick (just a very long one...haha), and when you are playing that very recognisable main part in a song, that'll be the riff.

And my last question:

Are You Ready To Rock Your fingers & Take Your Skills To

If you would like to learn how to improvise your own lick, or how to come up with your own riff for a song, then I have the perfect guitar training for you.

It is time to challenge yourself to the next level!

Introducing - Guitar: The Next Level!

Guitar: The Next Level is a professional guitar course teaching you skills that other teacher wouldn't dare teach beginner's at this level.

The objective of this course is to give you an inside into being a lead guitarist.

You'll learn how to express your new found skills and rip your guitar to shreds instead of just playing the same old songs.

If you are looking for fun, and you need a course to force you to play something new, Guitar: The Next Level is the perfect course for you.

You will learn all the important pentatonic scales (there are 8 of them, do you know them)?

I have exclusive lessons to help you rip a lick and improvise to a jam track.

You will also learn how to apply the pentatonic scale to chords and have you free style your guitar.

You'll learn the important skills to be ‘free’ with the scales so you sound great and feel confident.

You will also learn how to create riffs that stand out and sound distinctive.

Inside the course I have a bunch of awesome licks and riffs taken from the 8 pentatonic scale's that you'll be learning inside this course, and don’t worry, these are VERY easy to play when taught properly and will instantly make you sound awesome.

And if that wasn’t enough, you will also learn how to play the 12 bar blues...

And Blues licks and riffs...

But WAIT!! You will also learn blues pentatonic scales too.

AND.... There are jam lessons where you and me (your teacher) jam along together playing blues music at the same time.

My course also features interactive tab music, this is where the tab moves along at the same time you play so you know exactly where we are in the lesson!

Why Is This Course Important?

To learn how to solo, or how to create riffs, or how to improvise in blues and rock music while playing with your friends... You must know the most commonly used 8 pentatonic scale shapes, but more importantly, you will also need to learn how to use them properly in every day playing.

Most beginner guitarists get stuck on the first pentatonic scale shape, but to be truly free and to improvise across the entire fret-board you need to know all the shapes, and I teach you how to play them with ease.

What are the requirements?

Students will definitely need to know all the main open chords and be able to read chord tables.

You will also need to feel comfortable with basic chord transitions, and have had a crack at simple licks like 'Smoke On The Water' for example.

You will also need basic tab knowledge (although I do teach this inside the course), and have an interest in blues/ rock music.

What am I going to get from this course?

Learn a handful of licks and riffs and much more...